At Kris-Tech Wire, everyone knows they can step up to lead

Graham Brodock, CEO and an owner of Kris-Tech Wire in Rome, promotes a team-based culture at work.

“My role is to create an environment where leaders can develop and flourish,” Brodock said. “I need to let them do their thing and know enough to step out of the way.”

That’s why he didn’t want to conduct a leadership conversation without his team. Given the chance, Brodock would have asked all of his 40-some employees to the interview. Instead four people joined the conversation: Rob Hinsdill, engineering team manager; Jeff Manzo, vice president of operations; Bruce Robinson, sales operations manager; and Steve Pietrowski, sales team manager.

Kris-Tech manufactures wire for many industrial uses, including for electrical distribution, utilities, and gas and oil systems. Most of its growing customer base is in the U.S.

The company was founded in 1984 by Brodock’s grandfather, Gerry, and his twin brother Glenn. They had retired and were casting about for something new to do. Kris-Tech remains family owned. 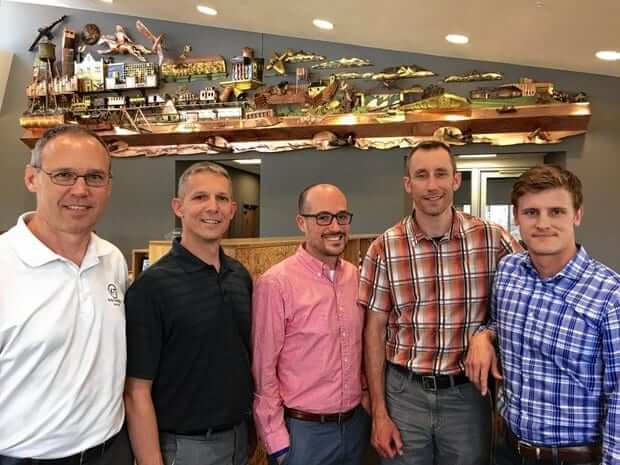 After he retired from Kris-Tech Wire in 2014, Jon Brodock worked with artist Jude Ferencz to create the metal sculpture hanging in the entrance of the company’s new headquarters. The sculpture depicts a narrative history of the city of Rome, which is nicknamed the “Copper City.” Standing from left are Kris-Tech team members Bruce Robinson, Steve Pietrowski, Jeff Manzo, Rob Hinsdill and Graham Brodock.

Tell me about this idea of shared leadership.
Jeff Manzo: We have a talented workforce in all positions here at Kris-Tech. We’ve built a culture around that. We’re working from the same playbook regardless if you’re an operator on midnight shift or an engineer or someone on the sales team. We work together, consciously, because it’s ingrained in our culture.

We put a lot of work into developing that culture.

Part of it is empowering and giving every single person here the ability to make decisions, from the same approach that an owner would. We all have the mindset of what’s truly in the best interest of the customer.

We have put tools in place, especially with operators on the floor, giving us the ability to utilize everyone’s ideas. One example of this is our Continuous Improvement Meetings. In those meetings, we’re figuring out what’s working, what’s not working, and, as a team, spitballing ideas to come up with creative solutions to better serve our customers.

Rob Hinsdill: A lot of people view leadership as needing to be the individuals in the higher positions, the presidents, the CEOs. But truly every single person within a company, on a daily basis, makes a decision whether or not to be a leader in what they are doing. You have the conscious ability to decide whether you want to step up and lead.

At the end of the year, when you look back and reflect, the company is exponentially further down the path of being more efficient, more productive and a better place to work because of every single small decision.

It doesn’t have to be this one grandiose decision coming from someone up top. It’s the summation, the collective sum, of everyone working together, making these small changes that have a profound impact when you bring it all together.

What would you tell a leader in another company who wants to establish that kind of culture?
Jeff Manzo: Two things are important. One is promoting open and honest communication. If everyone’s open and honest with each other and sharing information back and forth, it bridges all barriers and eliminates the politics that can get in the way of getting down to what is important.

The other item is that you have to recognize that answers are not always correct the first time. If you’re empowering people to make those decisions, when they make a mistake — because everyone’s bound to make a mistake — you utilize those as coaching opportunities.

People can come in at an entry-level role and make decisions and demonstrate characteristics that fall in line with our Kris-Tech values, which ultimately demonstrate leadership and give them the opportunity to move up within the company.

Steve Pietrowski: You really have to empower the individual, the guys working on the floor. Empower them, provide them with the tools and the training to be successful.

Then, you have to listen to the people making the day-to-day, sometimes hard decisions. They’re doing those tasks every day. Listening can sometimes be the most important thing.

Bruce Robinson: There’s a phrase that I’ve heard: A lot of people work on a need-to-know basis. I think it works better if you tell everyone everything and share openly and you only hold back those things which really must remain private. By letting everybody in on everything that’s going on, you foster community. You also fill people in on something that might help them do their job better.

Once you’ve done that communication, you give people the right to make their own decisions. As Jeff mentioned, sometimes people make the wrong judgment or it doesn’t work out, and you use that for coaching rather than as punitive. When you do that, everyone feels like you’re all pulling on the same rope at the same time.

Education and training are key to develop skills to compete in today’s industrial world.

Rob Hinsdill: Listening is important, and you have to be willing to act upon what you hear and the feedback that you can get from that. You see the light go on when suggestions and ideas come to fruition.

A lot of ideas come from our Continuous Improvement Meetings. We act upon them. Most, if not all, improvements to the system or to a machine come from the operators, who work on them on a daily basis. What they think really counts.

Kris-Tech is a successful and growing manufacturer. I hear naysayers complain that everything is made somewhere else and that it’s too hard to make things in New York. What do you say to that?
Jeff Manzo: Kris-Tech is a perfect example of a very talented workforce in New York state. Our company has the ability to compete globally with anyone in the wire and cable industry. Manufacturing can be done here, and it can be successful, and it can be done at a world-class level.

Graham Brodock: My team has done a great job of using local resources — Mohawk Valley Community College, for instance. Education and training are key to developing the skills needed to compete in today’s industrial world. Training gives our employees a whole new tool belt of experiences and capabilities.

Rob Hinsdill: We’ve utilized grants through SUNY to give guys more training, to open up their toolbox.

We’ve brought instructors in. Some of the training is in class, in our conference room. Other training is out on the floor, hands-on experience at the machines.

We went through three different training classes around lean manufacturing, beginning with 5S training. 5S is an organizational mindset around how you set up a process or your work area to be most efficient, without extraneous tools or distractions. It’s something you can measure and maintain.

We pinpointed some of the machines on the floor that have longer downtimes and tried to streamline changeovers while the machine is still running. This gets the changeover done quickly and allows us to do the cleanup work when the machine is up and running again.

We also did extrusion training. The guys on the floor were given training from a college professor — a subject matter expert. They were building their toolbox up so that they had a better understanding of how to operate their equipment and help lead Kris-Tech toward better operating methods.

Somebody mentioned the Kris-Tech values. Tell me about them.
Bruce Robinson: We’ve been having strategic planning meetings. One of the things was to look at: What makes Kris-Tech? Who are we? What do we want to be? So we thought about it and we talked around and looked at the attributes that we thought made sense.

The values have always been there. We wrote them down.

Graham Brodock: We came up with a bank of 30 words, started itemizing the ones that best identified us, and then we drafted those into a statement to create this narrative about Kris-Tech.

Any strategic plan is really an articulation of your values to create the foundation upon which you can build your sales, your operations, your systems, etc.

Our statement was not an invention. It was an articulation of who we are, what we do and how we got here. By recognizing how we got here, we can design a plan as to how we want to get there.

Then, we wanted to look forward to say: We’re at this point, but how do we improve? How do we get better? How do we do that?

We picked attributes that embodied the culture that we already have. Then, we can be more intentional about moving forward.

So the Kris-Tech values are?
Jeff Manzo: Kris-Tech is a relationship-based company committed to excellence demonstrated by our mutual trust toward employees, customers and the community. Driven by teamwork, communication and accountability and delivered with openness and honesty in everything we do.

Check out these Related Articles

What Are the Applications of HMWPE Wire?

What is XHHW-2 Wire Used for?

What Types of Construction Use Direct Burial Cable?

From Homer to High Tech