How Does Electrical Transmission Work?

You likely won’t be surprised to hear that Americans use a LOT of electricity every year.

In 2021 alone, electricity consumption in the United States was about 3.93 trillion kilowatt hours (kWH). Of that amount, about 39% (1.48 trillion kWh) was for residential use, while another 35% was consumed by commercial customers.

With so much electricity flowing, we have but one burning question. How does it get from the generation plant to the laptop, phone, or tablet you’re reading this on?

The U.S. Energy Information Agency (EIA) estimates there are 160,000 miles of high-voltage lines and millions of miles of lower-voltage power lines strewn across the United States. Almost as important are the nearly 12,000 power plants constantly generating a steady stream of electricity for more than 145 million customers.

An Overview of the American Electrical Grid

The electrical grid is split into three primary sections across the continental United States; the Eastern, Western, and Texas Interconnected systems. The Eastern and Western sections meet at the Rocky Mountains, and it should be obvious what territory the Texas grid system covers.

If you expand the territories to include Canada, the Eastern and Western Interconnections stretch north, except for Quebec. Like Texas, Quebec chooses to operate its own system across its province.

On top of large-scale producers is a cavalcade of smaller providers that can link to the larger grid, including homeowners, adding electricity to power a constantly growing and evolving grid. As grid technology becomes more advanced, sustainability, reliability, and delivery will also improve.

Power Loss Is a Huge Threat

Millions of people rely on the grid for their daily electricity, but what if the power we desperately need wasn’t there?

At the very least, we would face severe inconveniences at home, work, and everywhere else. More importantly, most of our lives would grind to a nearly complete stop. It would be nearly impossible to do business because you can’t process credit cards, track inventory, or keep products cold.

Hospitals and other healthcare providers would have to rely on generators to run machines and provide medical services. And if you wanted to make a phone call? Tough luck – almost all communication relies on electrical power sources to send and receive signals.

Producing electricity and delivering it to customers basically ensures we can keep on living the lives we’re accustomed to without any interruptions.

From Generation to Transmission

The electricity you and I use daily starts at an electrical generation plant, where one type of energy is turned into electricity through a conversion process.

As the plant generates electricity, it’s moved from the facility by high-voltage lines, known as high-line transmission. The high-voltage power is sent off to substations, where step-down transformers reduce the incoming power’s voltage to a safer level. Substations are also tasked with regulating power across the grid.

Why do electrical transmission lines need such high voltages, anyway?

Power plants aren’t typically centerpieces of the communities they’re in, generally leaving them relegated to the outskirts of town or near the resources used to create the power.

As a result, electrical transmission lines often carry power a long distance to get to customers, leading to some power loss along the way due to heat and resistance. Some voltage is lost during the transmission and distribution processes, so to mitigate the threat, high-voltage power lines are made with aluminum, which has a lower resistance than copper.

According to the EIA, from 2016 through 2020, about 5% of all the electricity produced was lost during transmission and distribution. To reduce the amount lost, power producers have one of several options open to them:

Combining these tactics makes it possible to get as much power to end users as possible and limit potential losses.

In addition to maintaining a steady supply of power, high-voltage transmission lines must be safe for workers and passersby. Because of how much voltage there is, wires are often high up in the air where people and animals can’t reach them. Conductors are also connected to the towers by using ceramic or porcelain insulators, allowing the lines to have enough space to avoid grounded materials.

Unlike most wire people deal with daily, high-voltage cable is uninsulated. Instead of insulation, the conductors use free air as an insulator and are placed far enough apart on the towers to prevent arcing.

Substations, Distribution Lines, and You

Electricity coming straight from the generation plant is too powerful to be used by consumers.

Think about electrical transmission like you would a bowl of soup. You’ve heated it up to a nice simmer and now it’s piping hot – this is not the time to pick the pot up off the stove and dump scolding hot liquid directly into your mouth.

Instead, you pour some into a bowl, add crackers, maybe an ice cube to cool it down, and then walk your bowl to the table. After all that, you get some soup onto your spoon, move it to your lips, blow on it, and THEN try it.

Every step in the process is meant to reduce the temperature of your soup to an acceptable degree. Similarly, every step in the electrical transmission process is designed to convert high voltage power into usable AC electricity for home and business use. 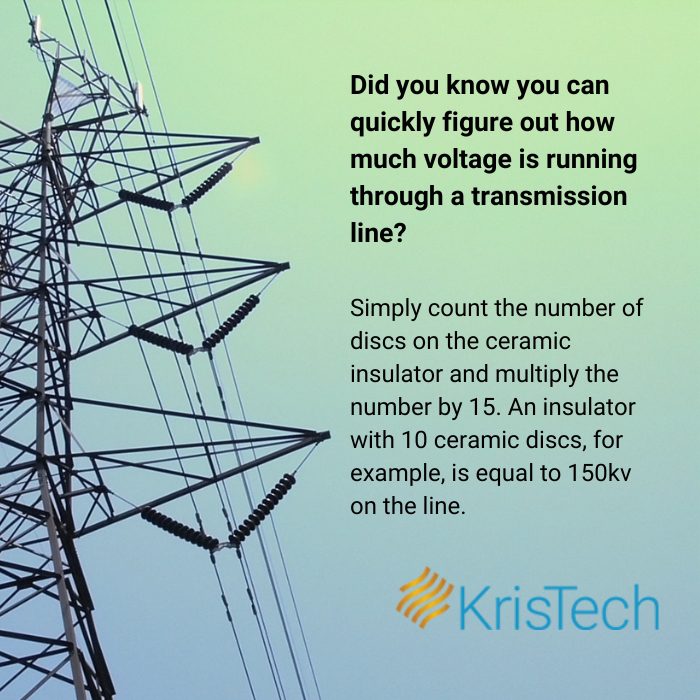 How Do Substations Work?

Substations are connection points along the transmission process where high-voltage power is stepped down using a series of transformers.

Transformers help quickly increase and decrease voltages but can also prevent faults by using arc fault interrupting breakers. These breakers constantly monitor the system for potential electrical arcs. The breakers will trip if an arc fault is detected, immediately cutting power to prevent a fire.

Transformers use adjacent magnet wire coils to quickly reduce or increase voltage entering and leaving them. On one side of the transformer, the magnet wire is coiled hundreds of times, while the other side will have fewer coils.

The imbalance determines how much the resulting power will be reduced. Let’s say we have a transformer with 500 loops on one side and 100 on the other. As the voltage is sent through, it will be reduced by five times. Smaller voltage changes are made using regulators before the electricity is sent out on distribution lines to customers.

Once the electricity has been stepped down for secondary distribution and transmission, feeder lines carry it along to its final destination.

As the electricity is carried to customers, it runs along lines attached to wooden power poles. These poles are equipped with non-conductive materials like porcelain to prevent fires, arcing, and other issues.

Before reaching its destination, the electricity is stepped down one more time to match the same voltage used by the customer. Homes typically use AC power, which is easy to step up or down as needed.

If anything, we can’t take the vast network for granted. The grid is getting older and is in line for major maintenance in the coming years. It also opens the door for innovative technology to better utilize energy and optimize voltage. As more customers draw from the grid during hotter summers and colder winters, it becomes more critical to keep it working smoothly and efficiently.

Smart grids are only one of many solutions capable of improving our situation. With more time and better technology, it’s possible to take advantage of new energy production methods, security features, and other benefits that make our grid safer.

Check out these Related Articles

Direct Burial Wire: Where and When to “USE” It

Are You Working with a Manufacturing Vendor or Partner?

What to Know About Tracer Wire Gauge Sizes

“Why Is My Wire So Fat?” or Why Wire Thickness Matters

What Is Tracer Wire and What Is It For?

What Is the Difference Between a String and Micro Inverter?

What Are the Applications of RHW Wire?

How Is Copper Wire Recycled?

The Importance of Tray Cable Shielding

How Does the Hydrovac Process Work?

The World is Embracing a Renewable Future. Can Copper Keep Up?

What Is Metal Clad Cable?

What Types of Tray Cable Insulation Are There?

Tracer Wire Ground Rods: How They Work and What They Do

Hard-Drawn vs. Annealed Copper Wire: What is the Difference?

Buying Tray Cable? 7 Things to Keep an Eye Out For

The U.S. Has an Electrician Shortage – Now We Have to Fix It

30+ Tools Electrical Distributors Should Use to Boost Digital Marketing Efforts

Is There a Copper Shortage Looming?

What Are the Applications for Blue Tracer Wire?

What is Exposed Run Tray Cable?

What Are the Applications of Orange Tracer Wire?

What Do All the Electrical Wire and Cable Acronyms Mean?

An Eye on Safety: Why UL Certifications Matter in Manufacturing

What Is the Difference Between Drain Wire and Ground Wire?

Wire Pulling Lubricants: What They Are and How They Work

The Need for Bonded Gas Lines in Homes and Businesses

Aluminum vs Copper PV Wire: Adding Up the Cost Difference

Why Should Electrical Contractors Use XHHW?

Tracer or Locating Wire vs THHN for Direct Burial Cables

More on Thermoset vs Thermoplastic Insulation for Your Copper Wire

Made in the USA – ARRA, Buy American, and Getting the Right Copper Wire